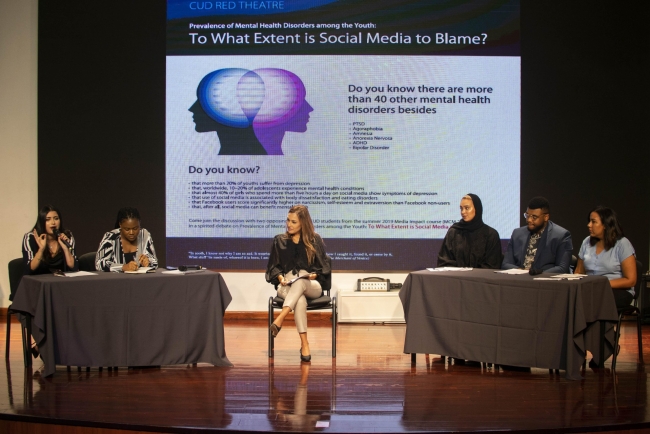 July 22nd, 2019: A team of students from Canadian University Dubai (CUD) has conducted a wide-ranging study into the impact of social media use upon youth in the region.

The project, which aimed to raise awareness surrounding mental health and wellbeing, culminated in a formal debate addressing the question, ‘Prevalence of Mental Health Disorders in the Youth: to What Extent is Social Media to Blame?’ In addition to social media, the research cited a range of developmental and societal factors that might also impact upon a young person’s mental health, concluding that longitudinal studies are required to consider these broader contexts and variables.

Conducted as part of the Bachelor of Communications course on Media Impact, the research explored the nature and extent of social media use among young people in the region, revealing that the Arab World has a very high rate of social media engagement, with the UAE ranking third highest for social media penetration in the GCC.

The research report also highlighted data which indicates that, “69.7 percent of students in the UAE use social media 5 or more hours daily and have been bullied online at least once”, and furthermore, “56 percent admitted to attempting to quit social media in the past 12 months but have failed to do so.”

Gaia Cianci, a second year public relations student who compiled the final project report explained, “The research was initiated to mark Mental Health Awareness month in May. We decided to tackle the subject of social media in particular because it is very relevant to a technologically modernized society like the UAE, and it is important to raise awareness of any potential impacts.

“Spending a lot of hours on social media myself made me realize that it is essential to understand its positive and negative effects on mental health, in order to avoid adverse consequences. Through the research, I concluded that social media can be a factor in mental health disorders; therefore, it is important to control its usage and not to rely on social networks to share every aspect of our lives.”

Addressing the opposing side of the debate, third year public relations student, Fatma Ali, said, “In my own experience, I consider social media to be an essential; I rely on it not only for entertainment, but also for career-related functions. However, through the research and debate, I learned what the real concerns surrounding social media are, and it was eye-opening to me. Nevertheless, in my personal opinion, I believe that I’m fully aware of the possible negative impact social media might have on mental health, and with that awareness, comes guarding myself from that impact.”

With both sides presenting compelling arguments, the study points to the need for more research to help inform the debate surrounding this contentious subject. Third year public relations student, Leslie Ogundkun, summed up the experience of many young people revealing, “Its impact in my life has been great, terrible and everything in between.”

The research was supervised by Professor Ode Amaize from the Faculty of Communication, Arts and Sciences, who commented, “While it is important for Communication and Media students to be cognizant of prominent theories of media effects, including computer-mediated ones; these theories are better understood and internalized through pedagogic praxes; for example, in this debate assignment developed and executed by our students.

“Interestingly, as noted in some of the opposing arguments, we learn of developmental, socio-economic contexts, and cultural factors, besides the use of social media, that explain the prevalence of mental health disorders among the youth.”

Visit the project Mental-Health Awareness Campaign for more information about the research, campaign and debate.