Sudhir Syal, Serving as Chief Business Officer for Lenskart - Middle East, Asia’s largest omnichannel eyewear retailer. Sudhir Syal boasts a wealth of e-commerce experience across the Middle East and Asia. Within his role, Sudhir is charged with identifying key goals, profit and loss responsibility, and the expansion of the brand into and across the Middle East. Sudhir’s four years in the region have ensured the correct merchandise and branding is incorporated into the local expansion to meet the company’s consumer promise.  His previous position as CEO of BookMyShow Middle East, an online entertainment company, prepared him for this current role, with Lenskart’s omnichannel approach tapping into e-commerce, fashion, and retail. Sudhir’s previous roles have included serving as a television producer and news anchor with leading Indian business news channel ET Now in Mumbai, India. It was here where he curated ‘Starting Up’, a special series featuring more than 200 start-ups and focused on the growth and challenges of the Indian start-up and technology community. Following his graduation in Engineering from Anna University, India, Sudhir was awarded an MBA from INSEAD. When he’s not busy strategizing Lenskart’s next Middle East launch, Sudhir can often be found playing golf or listening to Simon & Garfunkel. 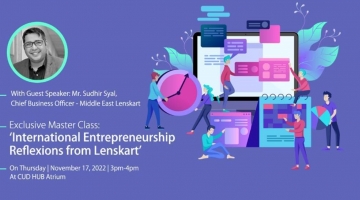